US officer who put knee on man’s neck should be charged, says Mayor

The mayor of Minneapolis called Wednesday for criminal charges against the white police officer seen on video kneeling against the neck of a handcuffed black man who complained that he could not breathe and died in police custody. 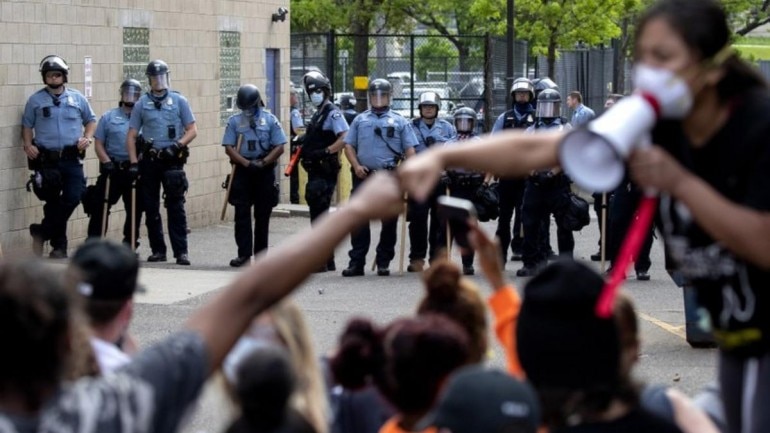 People gather in front of the Minneapolis police standing guard, Wednesday, May 27, 2020, as they protest the arrest and death of George Floyd who died in police custody Monday night in Minneapolis. (Photo: AP)

The mayor of Minneapolis called Wednesday for criminal charges against the white police officer seen on video kneeling against the neck of a handcuffed black man who complained that he could not breathe and died in police custody.

Based on the video, Mayor Jacob Frey said officer Derek Chauvin should be charged in the death of George Floyd. The footage recorded by a bystander shows Chauvin with his knee on Floyd’s neck as Floyd gasps for breath on the ground with his face against the pavement. The officer does not move for at least eight minutes, even after Floyd stops speaking and moving.

“I’ve wrestled with, more than anything else over the last 36 hours, one fundamental question: Why is the man who killed George Floyd not in jail?” said Frey, who is white.

He later added: “I saw no threat. I saw nothing that would signal that this kind of force was necessary.”

The day after Floyd died, Chauvin and three other officers were fired – an act that did not stem the flood of anger that followed the widely seen video shot on Memorial Day outside a convenience store.

Protesters marched more than 2 miles Tuesday to the police precinct in that part of the city, with some damaging property and skirmishing with officers in riot gear who fired tear gas. Conflict erupted again Wednesday at the same precinct, with some protesters throwing rocks and bottles at police. News helicopter video appeared to show looting of nearby stores, including a Target, a Cub Foods and an auto parts store, with no evident police intervention.