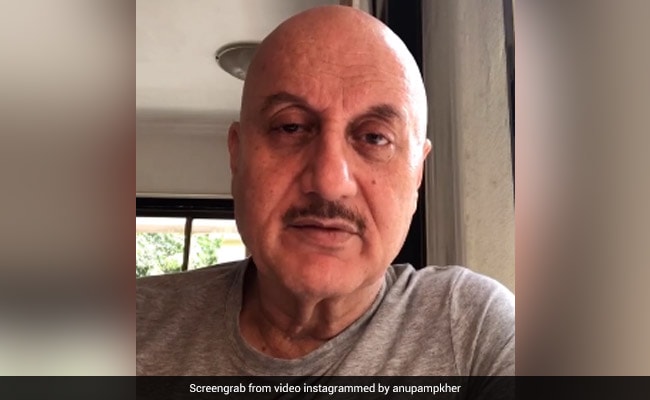 After Sushant Singh Rajput’s death on Sunday, his MS Dhoni: The Untold Story co-star Anupam Kher shared an IGTV video on Wednesday, where he urged “all the young dreamers” in the film industry to not lose hope. Anupam Kher said that Sushant’s death and the speculations relating to it on social media can make them feel negative about the film industry, but – “ye industry bohot acchi logon se bhari padi hai” Anupam Kher addressed the young people who come from small towns to Mumbai every year to chase their dreams, to not get heartbroken by the news. He said that they may feel apprehensive about the film industry but they should keep pursuing their dreams. Anupam Kher added that the loneliness during lockdown can affect them, but they should speak to their friends and their families.

He also took a trip down memory lane and spoke about the time 39 years ago, when he landed in Mumbai. He said that he faced comments like “ganja hai, khekre jaisa patla hai, Hindi medium school ka hai,” but he didn’t give up. He said, “Doston, haarna nahi hai, aapne sapno ko beech mai chodd na nahi hai, ghabrana nahi hai.” Anupam Kher spoke of the time when he slept on railway platforms. He also said, that he firmly believed in the advice that his grandfather gave him – “bheega hua aadmi, baarish se nahi darta.” He also said that Mumbai is one of the most considerate cities in the world – it has fulfilled a lot of dreams. Speaking of the film industry he said, “yahin ke log aapko aapka haath pakadkar aapko safalta ke sikhar taak leke jayega.”

The 65-year-old actor asked the newcomers to keep pursuing their dreams, as it would be the biggest tribute to Sushant Singh Rajput. “Isse bada tribute hum usse kya de sakte hai ki outsider baan kar hum haare nahi,” said Anupam Kher in the video. He ended the video with the poem Koushish Karne Walon Ki Haar Nahi Hoti attributed to Hindi poet Sohan Lal Dwivedi. Anupam Kher shared the video on his Instagram profile and captioned it: “A message for all the young dreamers who come to the city of Mumbai to make it big.” He also added the hashtags #dontgiveup, #workhard and #alldreamscometrue to his post.

Sushant Singh Rajput was found dead at his Mumbai home on Sunday – he died by suicide, police say. Anupam Kher, on Sunday, shared an IGTV video where he broke down while speaking of Sushant. “Very difficult to describe Sushant Singh Rajput’s death in words! And yet this probably is one of my longest IGTV videos. It will take me a long time to understand the magnitude of sadness it must have caused everybody in these times,” read an excerpt from his post.

Sushant’s death has provoked a lot of his co-stars and colleagues of the film fraternity to speak up against the “Bollywood privilege club” and the nepotism rampant in the industry. Actors such as Ranvir Shorey, Nikhil Dwivedi, Raveena Tandon, Vivek Oberoi, and filmmakers Anubhav Sinha and Shekhar Kapur called out the “Mean Girls gang” of Bollywood.

Sushant, who was last seen in Chhichhore, lost seven films in tenure of six months, alleged politician Sanjay Nirupam. Many alleged that Sushant was alienated from the big production houses of the film industry. Maharashtra Home Minister Anil Deshmukh announced that police will probe into the professional rivalry factor during the investigation on Sushant’s death.