on: May 31, 2020In: ENTERTAINMENT, MALAYALAM MOVIESNo Comments

Love in all its glossy and glamorous avatar is often explored in cinema. In Jibu Jacob’s ‘Munthirivallikal Thalirkumbol’, we have a true to life take on love. Unlike his previous laugh riot ‘Vellimoonga’, this one intends to give out a message than trying to entertain. Not that it doesn’t strive to be engaging, but ‘Munthirivallikal Thalirkumbol’ has an altogether different pace. We walk with the lead protagonist Ulahanan and we are bored when he is, are uninterested and uninspired when he is and are happy and entertained when he is. Basically his life leads us.

A jaded life, with a typical routine, Ulahanan (Mohanlal) leads a very uninteresting life. Its home, office, drinks with friends and back home for this man. He is someone who doesn’t have an opinion of his own or boldness to take a stand. Back home, he hardly communicates with his wife. His wife Annieamma (Meena) too leads a disinterested domestic life, with kitchen and serials ruling the routine. They have a daughter who is a class 12 student. Family life as Ulahanan says is an adjustment. We as audience feel the strain too. The boringness of the routine is translated to the viewers. This is quite a double edged sword as on one hand Jibu Jacob has been able to transfer the emotions of Ulahanan and family to the audience while on the other hand, it is barely entertaining.

A new emotion is introduced as the plot progresses and things perk up. Its love! But not for the wife. An ex-lover at a reunion and a beautician later, realization strikes. Asha Sharath’s cameo is interesting and her words become a trigger for Ulahanan. Neha Saxena’s entry though typical adds to the story. She has done her part well. Fidelity is something that Jibu Jacob tries to explore here. The character played by Anoop Menon too adds dimension to this theme. ‘Munthirivallikal Thalirkumbol’ doesn’t have a climax per se, but flows on like life does. What works in favour of the movie is that the slow pace in the beginning picks up speed towards the end, ensuring claps. The father-daughter dialogue in the end and Annieamma’s three ‘admirers’ all add to the punch. In between, the daughter’s rejoinders is one to watch out for as Ulahanan tries to woo back his wife and learns to love all over again. 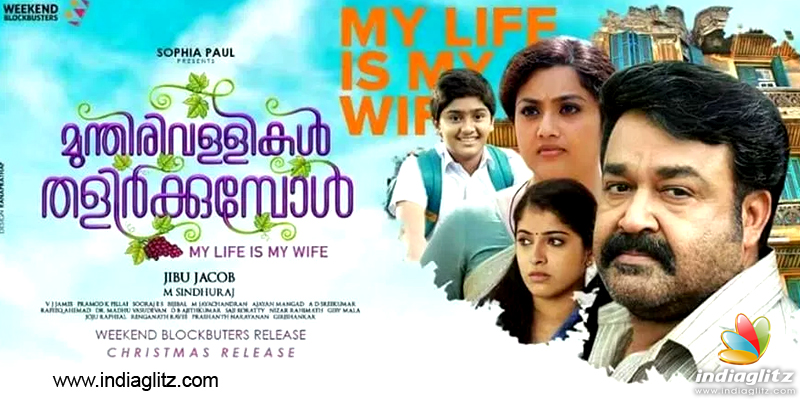 The movie does have its low moments as at the Panchayath office. Even the presence of Sharafudhin couldn’t bring out much of a chuckle. Jibu Jacob, who showed a refreshing lack of clichés in ‘Vellimoonga’ though has resorted to them in ‘Muthirivalli..’. Flirting, the belly show, a wife being chaste have all been tried and tested for ages. But to his credit, Jibu has at least come one step ahead and given Annieamma the hilarious admirers. Also the camera work is shoddy. The title has come out beautifully and then we have a helicam shot which is shaky. The colour tones are dry and the frames are just passable. Even the art work leaves a lot to be desired considering a realistic small town setting not come out right. Script by M Sindhuraj is good. Music is great and there are hummable tunes in the movie that gives a great feeling.

The message in the movie is palpable – of being in love (with the wife) and retaining that spark all through life and of children looking up to you and learning to take a stand on love. ‘Munthirivallikal Thalirkumbol’ is a pleasant watch with a sweet message.