Mumbai BJP president Mangal Prabhat Lodha found the viral photo defamatory. Lodha even claimed that the photo was made viral by the Shiv Sena’s Mumbai unit. 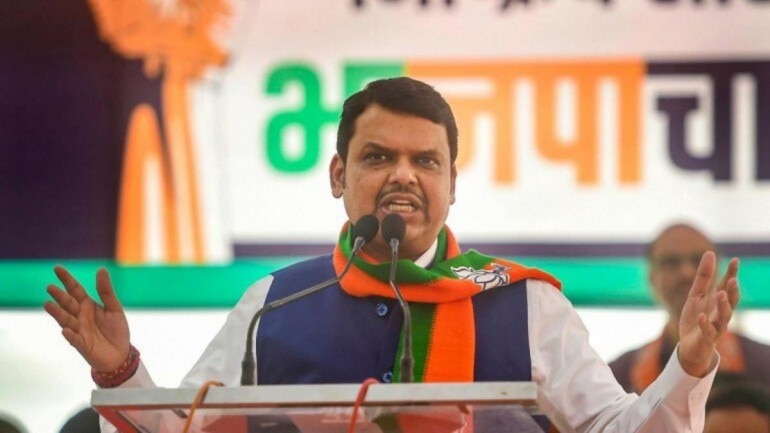 Social media users were quick to claim that Fadnavis was putting on makeup before the protest. (File photo: PTI)

After a photo of former Maharashtra Chief Minister Devendra Fadnavis went viral, a notice has been sent by Mumbai BJP to the city unit of Shiv Sena. Also, a written complaint has been lodged with Nagpur police.

The viral photo shows a makeup man putting makeup on Fadnavis in which he is wearing a blue jacket over a white shirt and black trousers. That was what Fadnavis was wearing while protesting against the Maharashtra government in Mumbai on Friday.

The BJP put up a ‘Maharashtra Bachao’ (Save Maharashtra) agitation and slammed the Thackeray-led government over its handling of the coronavirus pandemic. Social media users were quick to claim that Fadnavis was putting on makeup before the protest.

Lodha’s lawyer Hitesh Jain said, “The defamatory post falsely portrays that before the aforesaid protest, a makeup man was applying makeup on Devendra Fadnavis and that the protest is nothing but a photoshoot.” According to the notice sent by Jain, the photo of Fadnavis putting on makeup is actually quite old and was actually taken at the Ramgiri Bungalow in Nagpur when he was the chief minister.

Lodha stated that he himself was present at the BJP office in Nariman Point on May 22 when the party including Fadnavis protested. He stated that “no such thing took place before or during the aforesaid protest.” The notice states that the Shiv Sainiks like Rahul Kanal, who is named in the notice, purposefully circulated the post on various social media platforms to malign Lodha. The intention behind publication and circulation of the defamatory post is to defame and ridicule the agitation of the party which is also led by Fadnavis, stated the five-page notice.

The notice did not just seek deletion of the viral post but did ask for an unconditional apology within 24 hours. Speaking to India Today, Kanal said, “If you see my post, I am asking if this is true. I am not stating so. If anything is viral then it is my right to ask the concerned person and that is what I did. They should have just replied on the social media platform rather than send a notice. I don’t think I have done any wrong.”

Meanwhile, a man in white kurta pajama who is standing beside Fadnavis in the viral photo has filed a written complaint with Jaripatka police station. The man is Ghanshyamdas Kukreja who is vice chairman of NCPSL (National Council for Promotion of Sindhi Language). According to Kukreja, the viral photo was taken in 2019 before Fadnavis was going for an interview. Kukreja stated that the photo was taken in the bedroom of the then chief minister’s official bungalow Ramgiri which was used by Fadnavis whenever he was in Nagpur.