A low pressure area that has formed over the Arabian Sea is likely to turn into a cyclonic storm and move towards the coasts of northern Maharashtra and southern Gujarat by June 3, Wednesday, the India Meteorological Department said on Sunday. Based on the predictions, the IMD has also issued a pre-cyclone watch alert and has forecast rainfall over the regions of India’s west coast 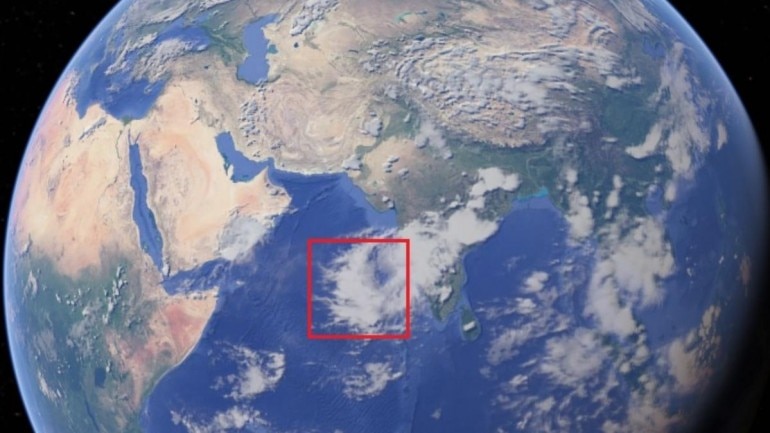 The low pressure area seen over the Arabian Sea. The disturbance is likely to turn into a cyclonic storm by Wednesday (Photo: Google Earth)

There’s a cyclone forming over the Arabian Sea that might take shape in the next few days and head towards the coasts of Maharashtra and Gujarat, the weather department said Sunday evening as it issue a “pre-cyclone watch”. The predicted cyclonic storm is forecast to come near the northern Maharashtra and southern Gujarat coasts by Wednesday, June 3, the India Meteorological Department has said.

The weather disturbance is currently a ‘low pressure area’ that will likely turn into a depression by Monday before further intensifying into a cyclonic storm by Tuesday.

Based on these predictions, the IMD has issued a “pre-cyclone watch” alert for the coasts of northern Maharashtra and southern Gujarat.

The IMD is also predicting that the weather disturbance will lead to rainfall over Lakshwadweep, parts of Kerala and coastal Karnataka on Monday and over Goa and the Konkan region on Tuesday. Rainfall is also expected over areas of coastal Maharashtra, southern Gujarat and the union territory of Dadra and Nagar Haveli and Daman and Diu by Wednesday.

The IMD has advised fishermen in the regions not to venture out to sea for the next few days, warning that the sea condition is likely to be rough to very rough.

The cyclonic weather disturbance over the Arabian Sea is still in its infancy and so, the IMD has not made public predictions of the expected cyclone’s path and intensity. What we know so far is that the disturbance is expected to turn into a cyclonic storm — when it will be named Cyclone Nisarga — and arrive near the coasts of northern Maharashtra and southern Gujarat by June 3.

We should know more on Monday when the IMD releases its fresh cyclone bulletin.